UN WOMEN AND THE EU

The Brussels Office aims to: 1) build and strengthen cooperation and partnerships for advancing women’s rights and achieving gender equality with the European Union (EU) and other Brussels based institutions; 2) contribute to the strengthening of gender equality in EU policies in line with international commitments to women’s empowerment and human rights. The office also engages in outreach, representation and policy dialogue with the governments and other partners in Belgium, France, Luxembourg and the Netherlands. Regarding private sector, the Brussels Office is also working on expanding partnerships, reaching out and mobilizing commitments around the Women’s Empowerment Principles. 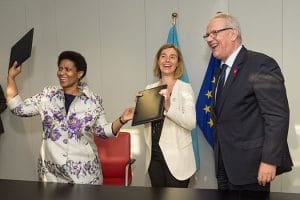 On 16 April 2012, the EU and UN Women signed a Memorandum of Understanding (MoU) which lays the groundwork for a dynamic partnership both in terms of policy dialogue/advocacy as well as joint programming. In 2016, a joint statement between UN Women and the EU recommitted to working jointly for gender equality and women’s empowerment worldwide to reach a Planet 50-50 by 2030. With strong political support at the highest level, the partnership outlines areas and modalities of cooperation between UN Women and the EU. The MoU covers both (i) policy dialogue as well as (ii) joint programming and focuses mainly on the following thematic areas: women’s leadership and political participation; women’s access to economic empowerment and opportunities; combating sexual and gender based violence; humanitarian aid/Women, Peace and Security; responsiveness of plans and budgets to gender equality; gender equality and women’s empowerment in the context of global issues (i.e.. sustainable development, climate change).

The partnership consists of joint policy dialogue and best practices exchanges, joint advocacy and joint programming for increased women’s leadership, political participation and economic empowerment, for combatting sexual and gender-based violence, and for responsiveness of plans and budgets to gender equality. Together, we stress the centrality of gender equality and women’s empowerment for development and peace in key international processes, such as the Commission on the Status of Women (CSW) and the UN Security Council agenda on Women, Peace and Security.

We also work together in more than 50 countries worldwide to push for gender equality legislation and planning and budgeting, to provide life-saving services for women survivors of violence, and to work with communities to break stereotypes. The active collaboration was also illustrated by the commitment of European leaders to the HeforShe Campaign as well as a vibrant joint comic competition, engaging young Europeans in picturing their vision of progress towards gender equality.

Annual Report 2017-2018: The time is now! At a historic time when women’s activism is galvanized around #Metoo, #TimesUp and other movements, around the world UN Women supports women politicians, lawmakers, farmers, small business owners, civil society activists and many others to claim their rights and to be heard. This year’s annual report report highlights some of the key results achieved in 2017–2018 in strengthening global norms and standards, increasing women’s leadership and political participation, enhancing economic empowerment, ending violence against women and girls, engaging women in all aspects of peace, security and humanitarian actions, and making gender equality central to national development planning and budgeting. More

Turning promises into action: Gender equality in the 2030 Agenda for Sustainable Development

“Turning promises into action: Gender equality in the 2030 Agenda for Sustainable Development”, UN Women’s new flagship report, provides a comprehensive and authoritative assessment of progress, gaps and challenges in the implementation of the Sustainable Development Goals (SDGs) from a gender perspective. The report monitors global and regional trends in achieving the SDGs for women and girls based on available data, and provides practical guidance for the implementation of gender-responsive policies and accountability processes. As a source of high-quality data and policy analysis, the report is a key reference and accountability tool for policymakers, women’s organizations, the UN system, and other stakeholders. More.