Brussels will be marking World Environment Day this Sunday with several events organised in the Belgian capital, in partnership with the UN Environment Programme (UNEP).

Throughout the day, members of the public can attend workshops, family activities and games. The city’s public transport network will also be involved in the celebrations. The day culminates with the City Hall of Brussels, on the world famous Grand-Place, lighting up in green in the evening.

Belexpo, which is also at Tour & Taxis, will be opening its doors to the public. It will be an opportunity to discover this interactive space dedicated to the climate and cities of tomorrow. 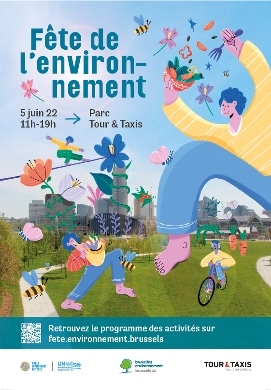 Sustainable transport
STIB, the public transport operator in Brussels, will take part in the day through a poster campaign in its stations. As well as encouraging people to take public transport more regularly, the company has also taken steps to showcase its commitment to the environment.

Since last autumn, and over the next two years, STIB has integrated a hydrogen bus amongst its fleet of vehicles to test this new technology. The trial is part of the Brussels-Capital Region’s goal to no longer use diesel and petrol engines over the next decade.

A standard hydrogen bus can have more than double the range of an electric bus equipped with batteries. Moreover, when hydrogen reserves are empty, they can be replenished in just a few minutes, in the same way as an ordinary vehicle. STIB has also installed almost 3,000 solar panels in its Ixelles vehicle depot, covering 43% of the depot’s consumption.

Inspiring waste management
To mark this important day, a reception will be held at the City Hall, where Brussels association STALEM will present its waste management project, which gives garbage a second life.

The association collects by bicycle the waste of traders in Brussels’ Stalingrad-Lemonnier district, and takes it to an Urban Logistic Centre. Once at the centre, the waste is sorted, and food that can still be consumed is redistributed to restaurants in the neighbourhood. In this way, the organisation promotes a circular economy.

Brussels City Hall goes green
At 9.30pm, on the Grand-Place, the Brussels City Hall will be illuminated in green. High level representatives from the City, including host Mr Benoit Hellings, Alderman for Climate and Sport, the government of Belgium, EU institutions, UN officials and the diplomatic community will be among the many visitors admiring the City Hall as it lights up in the colours of the day.

How can I take part in World Environment Day?
The #OnlyOneEarth campaign for World Environment Day 2022 invites you to celebrate the planet through collective environmental action. Whilst our individual consumption choices do make a difference, it is collective action that will create the transformative environmental change we need, so we can advance to a more sustainable and just world, where everyone can flourish.

Join people around the world and build your ‘Earth Action Number’ to showcase your environmental activities, as an individual or organisation here.